Cynthia Copeland, who prefers to be called Cindy, has written numerous books for adults on parenting, as well as numerous fiction and nonfiction books for children. She has won awards as well as accolades from people such as Oprah Winfrey, Regis Philbin, and Family Circle Magazine.

She has a book for just about anyone! I have collected her parenting books here. Please feel free to click on a book cover to be taken to its Amazon page for more information.

312 Best Things About Being a Stepmom 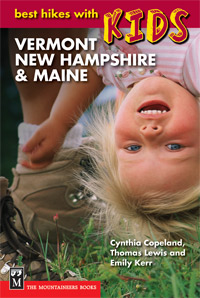 The Diaper Diaries: The Real Poop on a New Mom's First Year 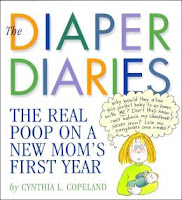 Fun on the Run

Really Important Stuff My Kids Have Taught Me 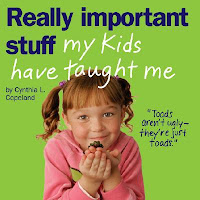 Email ThisBlogThis!Share to TwitterShare to FacebookShare to Pinterest
Labels: A to Z Challenge 2013, parents

Of course the second day must consist of our favorite B word: Babies! Babies are so wonderful, but leave a lot of people feeling like they have no idea what they are doing. Today's selection is a book that I saw on many lists, with a four-star rating (at the time of this post) on Amazon.

What are some of your favorite books about babies? 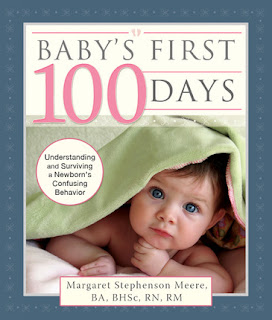 Each newborn is a little bundle of mystery. Baby's First 100 Days sheds light on your baby's behavior by explaining how a baby behaves and why, offering simple and authoritative advice on everything from burping to breastfeeding, recognizing signs of fatigue, dealing with tears, establishing a sleeping pattern and, most important, looking after yourself and enjoying time with your little one.

Email ThisBlogThis!Share to TwitterShare to FacebookShare to Pinterest
Labels: A to Z Challenge 2013, babies, parents

This blog is one of my newer ones. It is obviously dedicated to sharing books for parents and educators of all kinds. I love to share some of my favorite books, as well as discovering new ones recommended by readers. So, this year, I decided to collect a list of highly recommended books from my own experiences, readers, and recommendations I have read online, for this blog's first year in the A to Z Challenge. And to kick things off, I found an A to Z book that many people love. Have you read it?

Parents no longer have time to read long books about the theories of parenting. What they want are quick pieces of advice geared to their busy lifestyles and immediate needs. Dr. Jenn comes to the rescue with this fun yet useful book that offers 26 short chapters on everything from pets to being a sports parent to healthy relationships to food to keeping your marriage as much fun as it was before the children arrived.

Designed to be browsed or picked up from time to time for specific help, the book provides insight and guidance for any parent but focuses on those with toddlers to third grade. Upbeat, lively, and humorous, this book answers parents’ most frequent questions about how to raise a healthy, well-adjusted child. Because every chapter is only a few pages long and can stand on its own, busy parents can read what they need when they need it.

Email ThisBlogThis!Share to TwitterShare to FacebookShare to Pinterest
Labels: A to Z Challenge 2013, parents, self-esteem

'No Second Chance with Suicide' Article by Mary Jo Rapini

Mary Jo Rapini is a psychotherapist and coauthor of the book Start Talking: A Girl's Guide for You and Your Mom about Health, Sex, or Whatever. This article of hers about teen suicide was first published back in 2010, yet is still relevant today.

No Second Chance with Suicide
by Mary Jo Rapini

We see the news reports and hear about it on the radio. We read about it online and in the newspapers, and we will continue to until we can all do something about preventing it. Suicide is the 11th cause of death in the United States. It kills 31,000 people each year and severely inflicts injuries on another 425,000 each year. Suicide is the third-leading cause of death for 15- to 24-year-olds, according to the Centers for Disease Control and Prevention (CDC), surpassed only by accidents and homicide.

APRIL IS THE MOST POPULAR MONTH FOR SUICIDE IN THE UNITED STATES. We see parents out of work or losing their homes and their teen's depression or anger may go unnoticed. We see teens bullying or harassing other teens, leading the victimized teens to kill themselves. We see teens going through a break-up and feeling like their life cannot go on, and being sure their only peace is suicide. How does this happen? What is wrong with our children? How did we not notice as parents?

The profile of someone who turns to suicide is complicated. Many times it is someone we would have never suspected, but more often they have one of these issues: clinical depression, bipolar disorder, schizophrenia, alcohol or drug abuse, being bullied, feeling isolated or described as a loner or suffering a break-up. Those who are in the midst of one of these medical disorders may also have a chemical imbalance that prevents them from thinking clearly. They may convince themself that the world is better off without them, and many times they make that call for others as well. They may feel like they need to save others and to kill themself would be better. They have confused ending their pain with ending their life.


What can you do if you know someone -- or if a child you love -- is struggling and you worry about them committing suicide?

Step I. Don't ignore it. You cannot talk someone into suicide and bringing it up won't make someone act on it if they aren't feeling like it. In fact, it may have the opposite effect. Once you ask someone you may begin a dialogue with them where they begin to feel safer and more willing to discuss their pain or problems with you. Children are exposed to bullies not only at school but also in cyberspace. Three weeks ago, a child was brutally attacked in Florida by another teen over a text message. The child had been fearful but had not told her mother because she didn't know how to bring it up. Currently the child is in an intensive care unit in grave condition. Last week a 13-year-old boy in Texas hung himself in his parents' barn after being bullied, harassed at school and through Facebook and text messages. Schools are not sure how to handle this sort of bullying and if parents don't ask, many times children won't talk.


Step II. Make a doctor's appointment for your child right away. Your pediatrician is an excellent place to begin to assess why your child is depressed. It is not uncommon for children to become depressed during puberty. A physician can diagnosis if there is concern with hormonal changes as well as medications reacting with other possible medications.


Step III.  Invest in a good counselor. Sometimes problems are so shameful or difficult that your loved one or child cannot talk with a family member or close friend about it. A third party provides an environment as well as expertise at helping a person trust and be vulnerable with them. Once the problem is out in the open, it will be much easier to deal with. Very few problems eliminate themselves immediately. It takes time and patience to work through difficult issues. Remind your child that you are on their team, and you will not leave their side. Reassure them that this bad time will pass in their life. Children don't understand that what is such a big issue today will change to become something more manageable.


Step IV. Have your loved one sign a contract with you that they will not kill themselves. With the help of a counselor, you can make a family pact that your child will not do anything to endanger themselves. This may take vigilance on the part of the parents to spend the night watching their child, but this is more reassurance for the child that they are embraced in love and they can count on their parents to help protect them. If your child is over the age of 16, it may be important for them to be hospitalized during this vulnerable time. Alert your child's teacher as to what their part will be in helping keep the child safe. Teachers want to provide a safe place for your child but many times they don't know how. If a professional assists the parents and teachers, the child can get through this time feeling supported and confident.
Never forget that when someone is contemplating suicide they are also looking for weapons. Remove all guns, knives, belts, scarves and other potential threats from the immediate area. If we all become more aware, we can help prevent this deadly decision. A child's decision is never well thought out to end their life because they don't have the full brain development to make such a decision. Perhaps this is what is so scary. Although it isn't well thought out...it is deadly.

Mary Jo Rapini, MEd, LPC, is a licensed psychotherapist and co-author with Janine J. Sherman, of Start Talking: A Girl's Guide for You and Your Mom About Health, Sex or Whatever. Read more about the book at www.StartTalkingBook.com and more about Rapini at www.maryjorapini.com.